Hi, I don’t know how to get around an error code on a step in the course: Tello Camera Control with DroneBlocks Python App.

I followed along OK until the 3rd section "Download and Run the DroneBlocks Python Code (5:16) following the windows installation instruction video @ https://learn.droneblocks.io/courses/708045/lectures/12773328

When I attempt to run app.py for the first time it fails to get flask up and running with errors shown below.

Can you help please?

Here is a ‘pip list’ showing I had successfully loaded packages/dependencies up to that point:

That’s really strange. I just fired up a new project on my PC and got everything running fine. Here is my pip list: 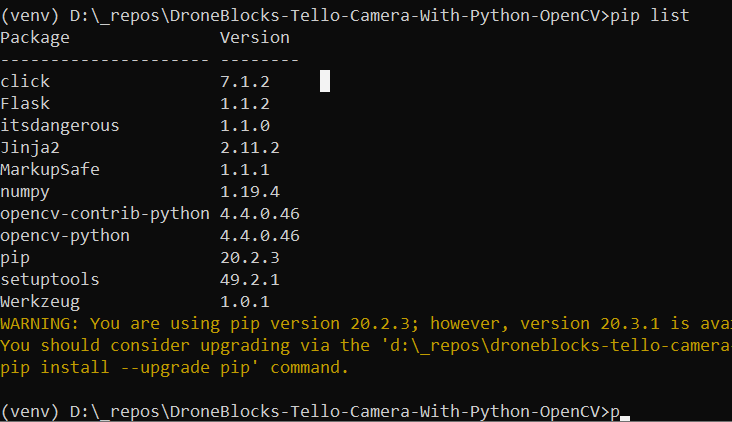 What version of Python are you running? Also if you run the following command can you tell me the path to your Python…

One other thing I’d like you to try. Go to your python prompt and try to import cv2 like explained in the video course. Do you get an error or does it import successfully?

I am having the same issue. Apparently a recent windows update caused an error with numpy.

They say it should be fixed mid Jan.

Matt, do you have a link that we can look through?

I got it to work following this suggestion @

ImportError to import cv2 on python

" I found out! For some reason the numpy 1.19.4 version has some bug on windows, just uninstall and install a previous version

As this source guided: https://github.com/twintproject/twint/issues/1030"